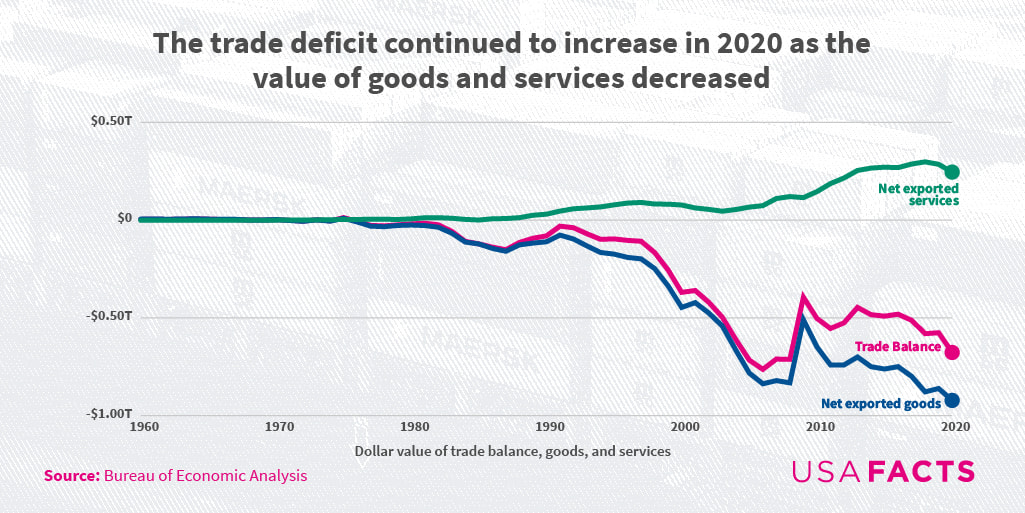 What does it mean for the US to have a half a trillion dollar trade deficit?

While half a trillion dollars can be startling to read, whether the US has an overall trade deficit or surplus says more about trade patterns than the health of the US economy.

Although the US is currently at a trade deficit, it remains the largest importer and exporter of goods and services, according to the Office of the US Trade Representative. This means that the value of imports, as well as exports, is larger than any other country’s.

What is the trade balance in the US?

The trade balance is the difference between the total value of goods and services a country exports and imports. Unlike other economic measures, such as gross domestic product, the trade balance does not evaluate economic strength. Instead, it provides a picture of trade patterns with other countries[1].

Several factors affect the US trade balance, such as the health of the global economy, the value of the dollar compared to the currencies of its trade partners, and the demand for goods and services at home and abroad.

For example, since the trade balance measures the value of goods and services in a global market, the strength or weakness of each US trade partner’s currency affects that balance. When a major trade partner’s currency is stronger than the US dollar, that can increase the trade deficit even if the number of goods imported or exported does not change.

However, healthy economic growth can also lead to the same result. When the US economy is strong, demand for goods and services increases, driving imports higher. This can increase the trade deficit even if US exports increase as well.

The current trade balance has decreased since the Great Recession recovery and is approaching a deficit similar to 2008 levels.

Learn more about the US economy here.